Frosinone, Italy – In these unprecedented Corona times, even seeing the referee take from his pocket a yellow or a red card would suffice for football supporters dreaming of being back in the stadium to see a live match.

In the case of Frosinone Calcio football club, however, the card is green. The supporters of this Latium-resident football club are cheering on their team also because of the club´s environmental ambitions. Home to Frosinone Calcio FC, the Benito Stirpe stadium is indeed waiting to welcome back the club´s supporters with an new important innovation in terms of sustainability.

The company managing the stadium -Together Infrastrutture Sportive s.r.l- commissioned a 100,8 kWp capacity solar photovoltaic plant on the eastern grandstand so that the needs stadium can be powered by renewable energy.

The solar plant was developed and built by IVPC 4.0 S.r.l., a company specializing in energy efficiency improvements based on renewable energy sources. The installation powers all the energy requirements of the football stadium; moreover, it provides clean energy to the offices of the managing company, to the Frosinone Calcio Official Store, and will in the near future provide the green power to the restaurant soon to be opened on the property. 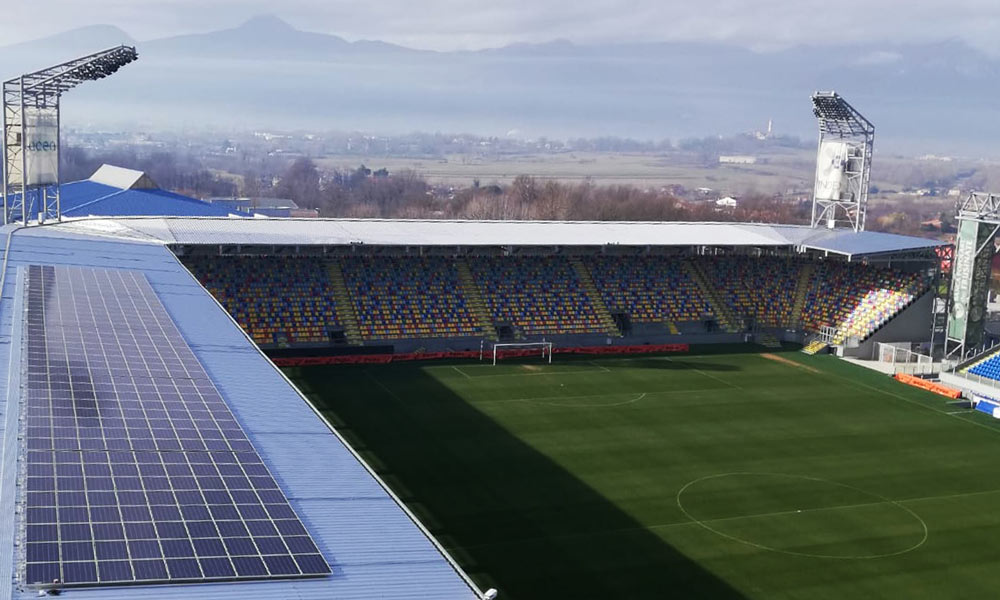 Most of the energy used by the stadium´s infrastructure during the daytime is generated by the solar photovoltaic plant, which was commissioned in June 2020.

The installation works under a net metering scheme and is subject to an operating lease contract. This brings the customer a double benefit. On the one hand, it allows for the stadium services to be powered by clean energy; and at the same time, it allows the owner to save on energy costs, thanks to the majority of the power requirements being delivered by self-produced energy, and with cash flow generated from the credit that the net metering scheme claims from the utility.

The plant features high-quality German-designed AEG-branded polycrystalline solar modules, which are distributed in Italy by VP Solar (www.vpsolar.com). VP Solar operates in Italy since 1999 as a major B2B distributor for professional solar companies.

Thanks to their high efficiency and manufacturing quality, AEG solar modules will allow the solar installation of the football stadium to carry on in its green mission for many championships ahead.

Receive the latest information about AEG solar products and business directly to your mailbox with our newsletter.